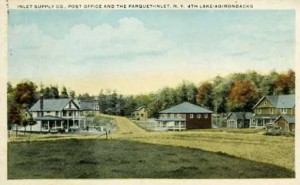 Inlet’s name comes from its location, the “head of Fourth Lake” near the inlet to the fourth of eight lakes in a chain named for Robert Fulton, of steamboat fame, who was commissioned by the state in 1811 to examine the utility of the chain for canal purposes.  A result of the American Revolution was that New York acquired millions of acres of unexplored northern wilderness previously owned by the British Crown and its Iroquois allies.  Today’s Adirondacks were a large portion of this and the cash poor state took steps to sell what they determined to be unappropriated lands as quickly as possible and for it to be surveyed as well.  While famed patents such as the Macomb Purchase and the Totten & Crossfield Purchase were patented in the 1790s, it was not until 1820 that Inlet’s Moose River Tract was surveyed.

Today’s annual “90 Miler Canoe Classic” travels the natural water highways used by first the Iroquois, then by the hunters and sportsmen who knew the Chain’s natural resources of fresh air, first-growth woods, fish and game.  For most of the 19th Century, the region passed through a series of speculators (Farrand Benedict-1844, Marshall Shedd Jr.-1847, Parmelia Munn of Talcottville-1866) who acquired the land in hopes that chartered railroads and canal systems opening the region to settlement and commercial purposes would be built.

But the only capital improvement would be the state’s Sixth Lake Dam, built in 1880, when it acquired and upgraded the Old Forge Dam, to harness the upper Fulton Chain for using Moose River Middle Branch waters to replenish the depleted Black River, which fed the Erie Canal.  By 1890, pioneering guides  opened hunting camps on Fourth Lake shores,  but the most widely known was the Cedar Island Camp, Hess Camp, built in the early 1880s by Fred Hess, the son of a poor Greig farmer and who learned to hunt, guide and build.

Inlet’s birth as a town occurred during the 1890s.  In March 1889, five businessmen, one of whom was Carthage’s James Galvin, started an association called the Fulton Chain Club and later that year purchased from Munn’s heirs over 6,000 acres surrounding the Head of Fourth Lake and extending to Limekiln and Seventh Lakes.

They hired the competent Fred Hess, who quickly sold his Cedar Island camp, as their forest superintendent.  Hess built a sawmill at Fifth Lake (1892), purchased on reasonable terms from the Club, for producing lumber for building and Club sales.  The Club’s intention was to establish a private preserve with rules similar to the neighboring Adirondack League Club but that failed, providing the opportunity for settlement along the shores of the above lakes now part of today’s Town of Inlet.

In late 1890, the Club sold Hess 30 acres, which he soon partitioned, on the shores of Fourth Lake by the “inlet”.  Fred Hess built “Hess Inn” in 1892-1893 and in 1893, the Club sold land to others who would build Rocky Point Inn.  Hess sold his hotel to William Moshier in late 1896 who renamed it “The Arrowhead” when Hess opened a newly built hotel next door during 1898 which he named “Hess Camp”.  Charles O’Hara arrived in 1896 and built the Inlet Inn on the channel to Fifth Lake.  Duane Norton purchased Club land in 1898 for his Seventh Lake Hotel.  Of these hotels, only the Hess Camp survives today, as The Woods Inn.

The Fulton Chain Club’s failure to attract investors prompted the directors to subdivide the shores of Fourth, Fifth, Sixth, Seventh and Limekiln Lakes into lots which were initially sold for $200 for campers.  From 1895 to 1902, pioneering families with names like Delmarsh, Harwood, Murdock, Tiffany, O’Hara and Kirch bought lots from James Galvin, the Club’s local agent, and built homes and stayed.  The increase in residents resulted in Inlet’s establishment as Election District No. 2 for the then Town of Morehouse.  Access to the “Inlet” was expanded with improved steamboat transportation from Old Forge during in the 1890s and an Old Forge-Eagle Bay “highway” finished in 1899.  This was followed a year later with the 1900 opening of the Raquette Lake Railway branch from Clearwater (then Carter Station) and from the New York Central passing through Thendara, built by Dr. Webb in 1892. Inlet’s rapid growth and transportation needs, as well as the long distance to County offices at Lake Pleasant, helped convince Hamilton County to partition the area of Morehouse north of the South Branch of the Moose River in November 1901 and “erect” the new “Town of Inlet”.

In addition to hotels, a new settlement grew at the “Inlet”.  Arrowhead Hotel owner Albert Boshart divided his property along “highway” into village lots in 1906 as did The Wood Hotel owner Philo Wood later in 1922.  The Inlet Common School opened in 1906.  The Chapel of the Lakes was dedicated in 1901. Fred Parquet built his first Hotel Parquet in 1906 which soon included a next door Post Office, Herman Williston opened the Inlet Supply in 1911. Both Eri Delmarsh’s Delmarsh Inn and Wallace Darling’s Limekiln Lake Hotel opened at Limekiln Lake in 1921. Fred Trottier’s Restaurant-Hotel, John Simon Kalil’s Food Market, Harry Hall’s Wholesale Dairy-Grocers and Mary’s Gift Shop opened in 1922.  Old Forge’s Thomson (Strand) Theater owner opened the Pavilion Theater in 1923 which burned in 1926 and a major building, the Routstone Block (today’s Gaiety) was built that year by Utica merchant Jacob Routstone.  By 1930 the Red & White (Dewey Rudd), today’s Pedals & Petals, and the Inlet Toggery (Harry Berkowitz), today’s Legion Building, were operating.  Many of these and other early pioneering commercial structures have survived and are part of today’s downtown Inlet’s business district.

Inlet’s religious needs were expanded with St. Anthony’s, dedicated in 1913, and a third church, the Inlet Community Chapel, dedicated in 1951.  Inlet’s current Post Office, which also was its first firehouse, was built by town businessmen and opened in 1927.  The road through Inlet from Old Forge and Eagle Bay stopped at Seventh Lake until 1929 when the state highway to Blue Mountain opened.  In 1963, the Town acquired the Arrowhead Hotel property and developed today’s Arrowhead Park to the continuing enjoyment of Inlet residents and visitors.

Today’s Inlet remains a home to residents and a popular destination for summer and winter visitors, many of whom believe sufficiently in its worth to warrant purchasing second homes in Inlet.